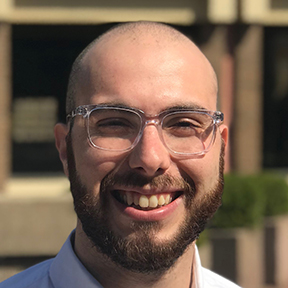 Rob Gleisser’s passion for Judaism and Jewish studies began at a young age while growing in Shaker Heights, Ohio. While in high school, Rob served as a leader in the Student Group on Race Relations (SGORR), where he developed an interest in identity dialogue and leadership training. Rob has been able to integrate these areas of experience into his work as the Camp Director of Kids4Peace Cincinnati, a week long interfaith day camp in Cincinnati, and as Rubinstein Rabbinic Fellow at The Ohio State University’s Hillel. Rob is a graduate of The Ohio State University with degrees in Jewish studies and communications. He has served as a student rabbi in New Iberia, Lousiana, and Flint, Michigan, and has worked as an education fellow at Valley Temple in Cincinnati. Rob is a die-hard Cleveland sports fan, and loves to read and write in his spare time.

Creating a Community of Action